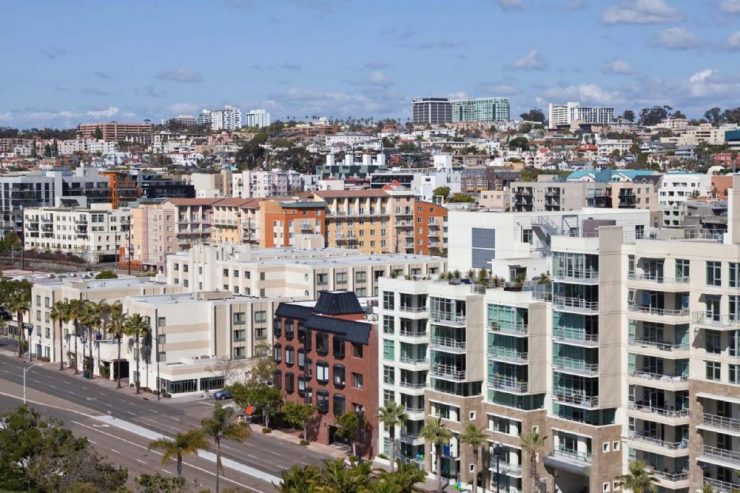 San Diego officials approved a licensing program intended to cap properties available for short-term vacation rentals on sites such as Airbnb at 1% of overall housing inventory.

San Diego City Council has approved a licensing system for short-term vacation rentals hosted on sites such as Airbnb, as the nation’s eighth-most populous city looks to address a long-simmering debate pitting property owners’ rights to earn extra income against their neighbors’ complaints about unwanted noise and traffic.

The system caps the number of vacation rentals in most neighborhoods at 1% of total housing units, in an effort to preserve the stock of affordable apartments and other rental homes amid a worsening statewide housing crisis.

The program, approved Tuesday by a vote of 8-1 after a December recommendation from the Planning Commission, creates a four-tiered licensing system, with fees and penalties to be determined later. It takes effect on July 1, 2022.

“It’s time to return some of these properties for people to live in,” said City Council President Jennifer Campbell, who proposed the changes based on a compromise measure crafted last
year by participants including Seattle-based Expedia Group, which operates vacation rental websites including VRBO and HomeAway.

Other U.S. cities, including Denver, Colorado, and Austin, Texas, have taken similar steps to regulate impacts from the rising trend of short-term vacation rentals through licensing. This week’s San Diego vote follows almost five years of debate on how to regulate vacation rentals,
which have been a key part of the local tourism economy since long before the rise of Airbnb and rival hosting sites.

Disputes have raged locally between host property owners seeking to protect their right to make extra income from vacation rentals and neighbors of those rentals faced with noise, traffic, trash and other nuisances created by short-term visitors in what some critics have called “party houses.” Housing advocates have said the short-term rentals also have helped
exacerbate a severe affordable housing shortage by taking units out of the local inventory.

The new San Diego program is based on a compromise reached last year between Expedia Group and labor union Unite Here Local 30, which represents thousands of local hotel workers. City staff later this year are expected to recommend specific licensing costs to be imposed in a four-tiered system based on factors such as location and type of rental — wholehome
or single-room rentals, for instance — and the length of rental stays that are permitted.

License caps and fees in the program would be reevaluated on an annual basis to measure their effectiveness and give a variety of homeowners in good standing a chance to put their properties up for potential short-term rentals in coming years. Fees for licensing and property violations would go toward enforcement efforts, and city officials in the future may
consider putting some fees toward affordable housing programs.

City officials have discussed a licensing fee that might range from $1,000 to $1,200 annually and penalties for on-site nuisance violations that might be set at around $1,000 per incident.

Officials said the new rules could reduce the current stock of short-term vacation rentals in the city by 60% to 70% over the next few years.

Local vacation rentals posted on booking sites totaled around 16,000 as of mid-2019, according to the city.

During Tuesday’s online City Council meeting, representatives of Expedia and some local business groups, including the San Diego Regional Chamber of Commerce, called the compromise measure a “reasonable step forward” in addressing longtime debates over short term rentals in the city.

However, caps on vacation rentals in San Diego and other cities are opposed by the largest rental site operator, San Francisco-based Airbnb, and host organizations including the Short Term Rental Alliance.

During Tuesday’s meeting, Airbnb spokesman Craig Benedetto called the proposal a “cynical effort” to ban rentals that would result in the city losing significant amounts of transient occupancy tax revenue that it collects from rental hosts. He also raised concerns about whether the move would run afoul of California Coastal Commission preferences for retaining affordable waterfront lodging options.

The San Diego council decision came after a discussion that lasted more than six hours and included comments from more than 100 callers for and against the new enforcement program, including several dozen residents who host short-term vacationers and rely on the extra income.

The measure was opposed by Councilmember Joe LaCava, who said he wanted more flexibility on the rental cap and a potential limit on licensing terms, of perhaps six years for some larger properties, in order to address fluctuations in local housing needs and give more people a chance to rent their properties.

Council members also want the city to ensure that the hosting sites are held accountable in the future for making sure that all online vacation rental postings are for properly licensed San Diego properties.
“Short-term rentals are in the DNA of our city,” said Councilmember Chris Cate. “There needs to be some certainty [over enforcement] at the end of the day.”