Focused on Your Success in Downtown, Golden Hill and Hillcrest

We are about half way through our tour of the county’s most active apartment markets. This month we review value trends in three core vintage
zip codes of Downtown, Golden Hill and Hillcrest.

Quickly, guess which zip code grew the most. Which grew the least? Read on; you may be surprised!

Save the articles that pertain to areas where you own or might want to own.

Learn the appraiser’s perspective of the value trends. Remember our methodology. Our team looks at every apartment sale beginning in 2010 and determines the price per apartment, price per square foot of improvement and how many times the annual income, Gross Rent Multiple, GRM, the
buyer paid for the asset. Next we calculate 12 month average, over time. So the first data point is for sales January 2010 to through December 2010. The next data point will be February 2010 through January 2011. This moving average reveals trends. If there was not a sale in January
2010, the first graph point in early 2011 shows the average of the first twelve months of sales. The final point includes last sale before press deadline. The graph covers five and a half years of averages.

Downtown is home to 28,000+ people and 4000+ businesses. It is the county’s cultural, financial hub. About half of the county’s multifamily development has occurred in this zip code.

Downtown’s borders are: San Diego Bay to the west and southwest, Hillcrest, Bankers Hill, Middletown, and Balboa Park to the north, Sherman Heights and Golden Hill to the east, and Barrio Logan and Logan Heights to the southeast. The airport is just northwest.

The 92101 apartments vary more than any other zip code. The averages combine 100+ year buildings with no parking – apartments less than 500 square feet and new apartments with 1000+ square feet.

There were 41 sales below $100 million. In one twelve month period there was only one sale. A few months sales are averaged over 13 months to minimize distortions of the small data set. Price per square foot roughly doubled from $197 to $381. Unit values grew 25% from $187k to $233k. GRM jumped 35% 9.5 from 12.8. Blending the three values shows 50% increase in five and half years, roughly 9% average annual growth. 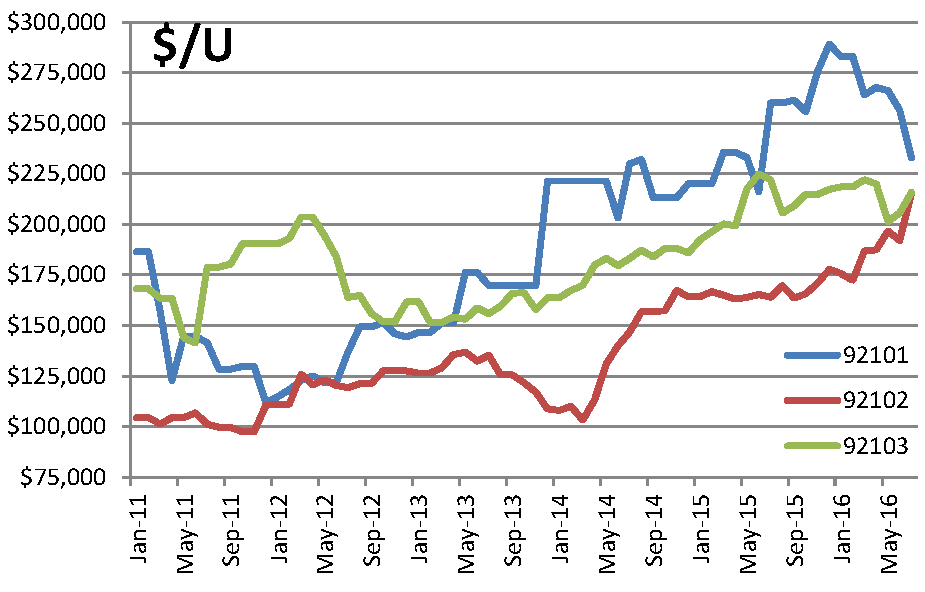 Last generation it was unclear whether the homeless or the yuppies would prevail. Now millennials, formerly known as yuppies, have transformed this
community. High walk-ability, chic local diners which showcase a sense of place and convenience to Balboa Park, downtown and freeways make this niche a city planner’s fantasy.

Population of 44,000 makes it slightly larger than many zip codes. Most 92102 apartments were built before 1954, 20 years older than the rest of the
county. As cities are built the neighborhoods appear first in the most attractive and convenient areas. With passing decades new families settle further out. 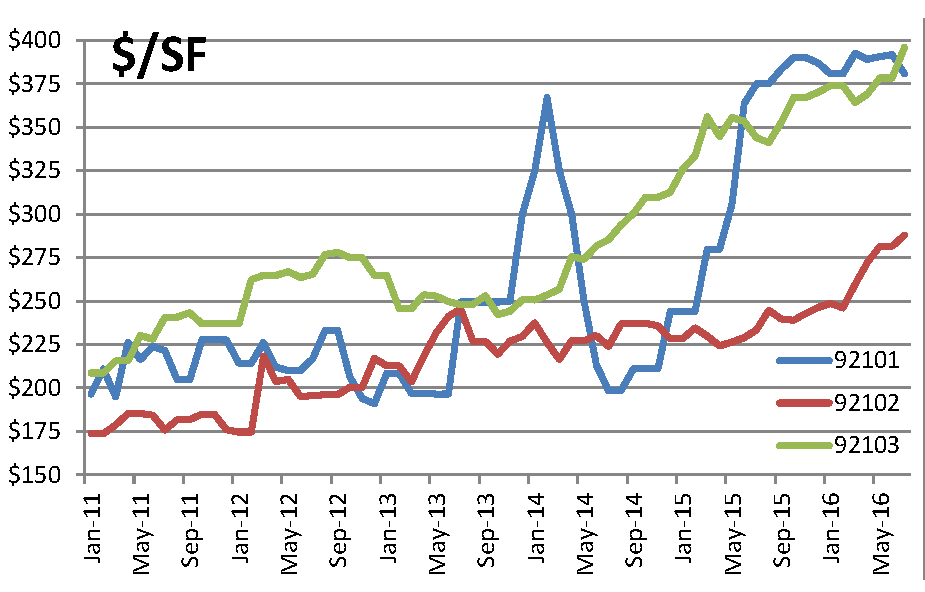 92103 is bordered by downtown and Balboa Park to the south, University Heights, 92116, to the north, and North Park, 92104, to the east. The western border has a large ridge overlooking San Diego Bay. Interstate 5, Highway 163 and convenient mass transit provide convenient access to city charms and employment. 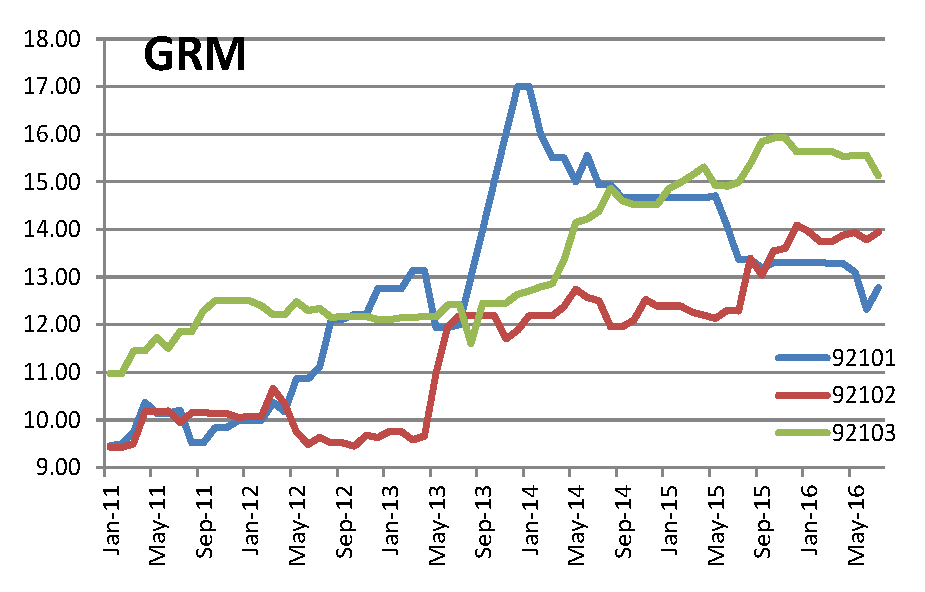 Did you guess that Golden Hill values had grown faster than either downtown or Hillcrest? Few of us got that one right. The race does not always go to the swift. Regardless of history, the real question is, “What is best for your household for the next decade?”

Friend, I’m 30 years older than I was 30 years ago. Even if our former strategy was brilliant then, it may not be appropriate today, much less the next 30 years. Your properties are probably worth more than ever before and you can decide how to use the equity. In 50 years, Friend, we won’t be making those choices. You have spent a life time gaining wisdom and wealth. You still have enough time and energy to make at least one more smart choice for your household’s future. Avoid drift; show leadership.
About the author: Terry Moore, CCIM has spoken almost 20 times to SDCAA meetings, seminars and trade show presentations. He is active in the
fight against rent control. He has been an SDCAA member 29 years and is part owner of Apartment Consultants Inc, ACI, the county’s most active apartment brokerage firm. Reach him at 619-889-1031 or www. SanDiegoApartmentBroker.com or tmoore1031@gmail.com