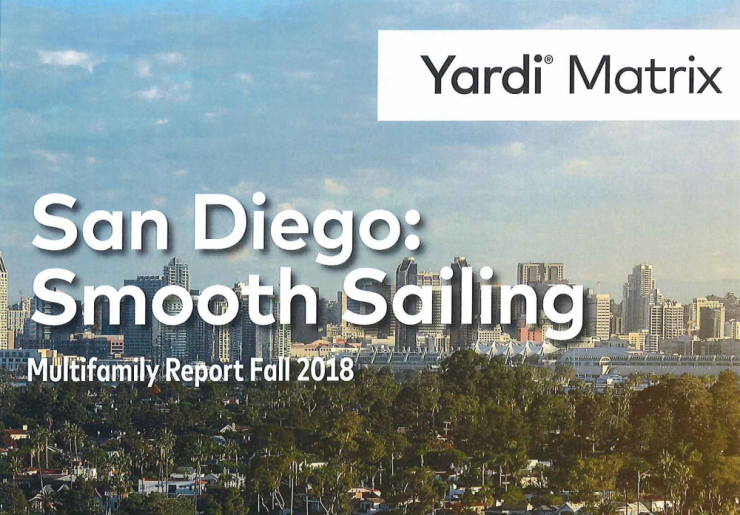 The San Diego region continues to assert itself as a leader in multifamily fundamentals, so suggested a recent report from Yardi Matrix. In a quarterly market analysis focused on “America’s Finest City”, Yardi Senior Associate Editor Adriana Pop identified several factors that have driven San Diego to have some of the nation’s best rent growth. From a distinctively low amount of new unit supply, strength in the employment market (particularly in business and technology), and above average demand have helped shape the continued upward mobility for San Diego rents. A trend that is likely to continue.

The Yardi Matrix study found that San Diego rent growth continues to trend notably higher than the national average. On the national scale, rent has seen steady growth over the past year, with a steady increase from around 2.2% in September 2017 to nearly 3.0% growth as of September 2018. San Diego’s rent growth has been more dramatic, peaking at times as high as 4.5%. Currently, San Diego rents have leveled off at 3.9%, still 0.9% higher than the national average. The study also notes that San Diego occupancy rate continues to trend high as well, currently maintaining at 96.7%. 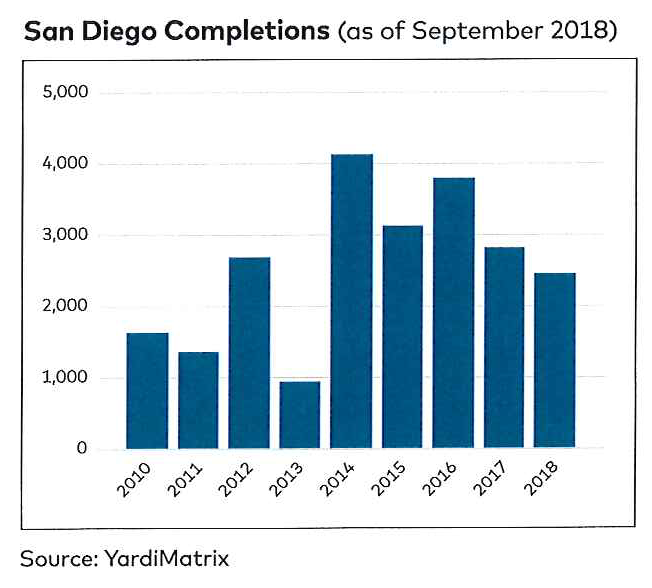 This high occupancy rate is significant within the study as it considers the new available units that have been absorbed into the rental inventory throughout 2018. Of the units available, many these units consist of B and C class properties motivated by necessity-driven renters. In fact, according to Yardi Matrix, renting-by-necessity rose at a 0.5% higher pace than renting by choice households (The difference of 4.2% versus 3.7%). Despite attempts to increase rental unit supply (Yardi projects that as many as 8,000 units were under construction and 31,500 were in planning stages) San Diego absorbed the 2,453 of new inventory at a fast pace. The Yardi Matrix study notes that “Demand is keeping up with the pace of new supply, bolstering above-average rent growth”.

That demand is directly tied to the strong economic atmosphere that San Diego showcases. Between July 2017 into July 2018, San Diego added 21,200 jobs to the local economy. Of this employment growth, Professional and Business Services saw the largest year-to-year increase at 4.9%. Continued expansion by large technology companies like Teradata and Amazon were also cited as influential for the increased economic vitality for San Diego. Strong regional job opportunities have also correlated into an increase in population for the San Diego region. Although not as strong as the national average (0.7%) San Diego saw a population increase of 20,000 residents (a 0.6% increase). This stead stream of new residents needing a place to live has resulted in the acquisition of San Diego’s housing inventory. According to Yardi Matrix, the blow this has had upon affordability has affected home buying more dramatically than renting (the difference of around 5%).

With San Diego continuing to trend higher in many fundamental categories in comparison to the national averages, it showcases the strong potential for continued rent growth during questionable economic times. Although the study does identify the cost of living as a major factor affecting tenants, an ever-increasing population and reduced housing market means higher rent increases are the new normal until supply can meet an ever-growing demand.