The Multifamily Roller Coaster Climb Continues: Forecasts Certain of a Strong Sector in 2018

Despite signs of tightening within the multifamily sector, the national rent growth roller-coaster continues to climb, albeit slowly, going into 2018. Although many real estate professionals see this as a sign that property values will soon decrease, any drop right now would likely be extremely shallow, buffered by a lack of supply nationwide. These are the trends most prevalent in three market forecast reports released by leading experts last month. 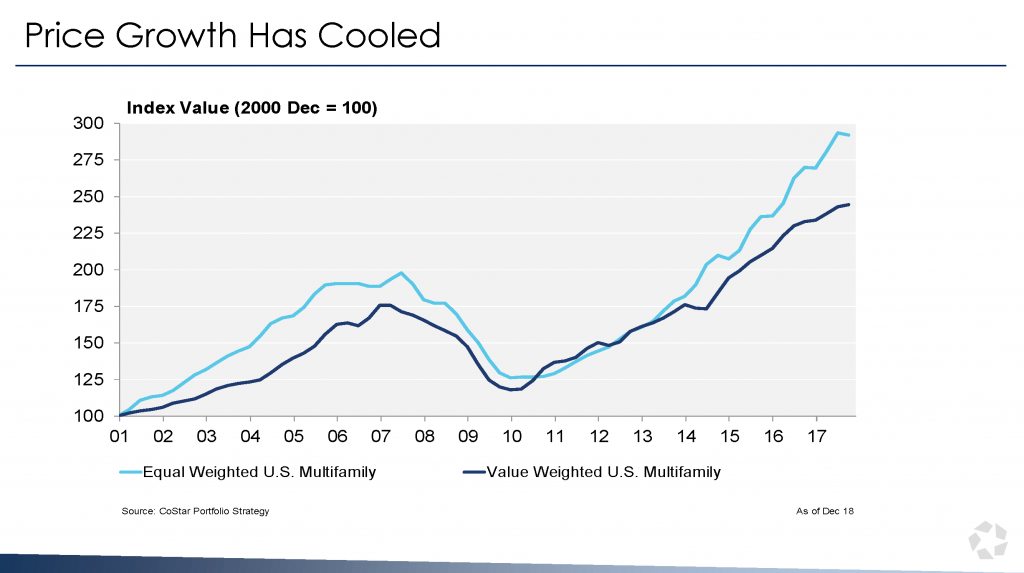 During a recent webinar where he shared the findings of his forecast report, Michael Cohen, a lead researcher for the CoStar Group, suggested that demand continued to outpace supply at the national level throughout 2017, matching many of the same trends seen in 2016. Mr. Cohen attributes this steadiness to a national culture that has begun to de-stigmatize the concept of renting, particularly as single family permitted building continues to under-perform.

As an example of this under-performance, Alan Nevin of Xpera Group recently suggested that the number of permitted single family home projects nationwide in 2017 was only 850,000 units, well below the 2004-2006 average of 1,558,000 units.  Indeed, all three forecast reports suggested that despite a tightening of the multifamily sector, a lack of single family options are leading more American households to rent, resulting in higher occupancy rates and more opportunities for regional rent growth. 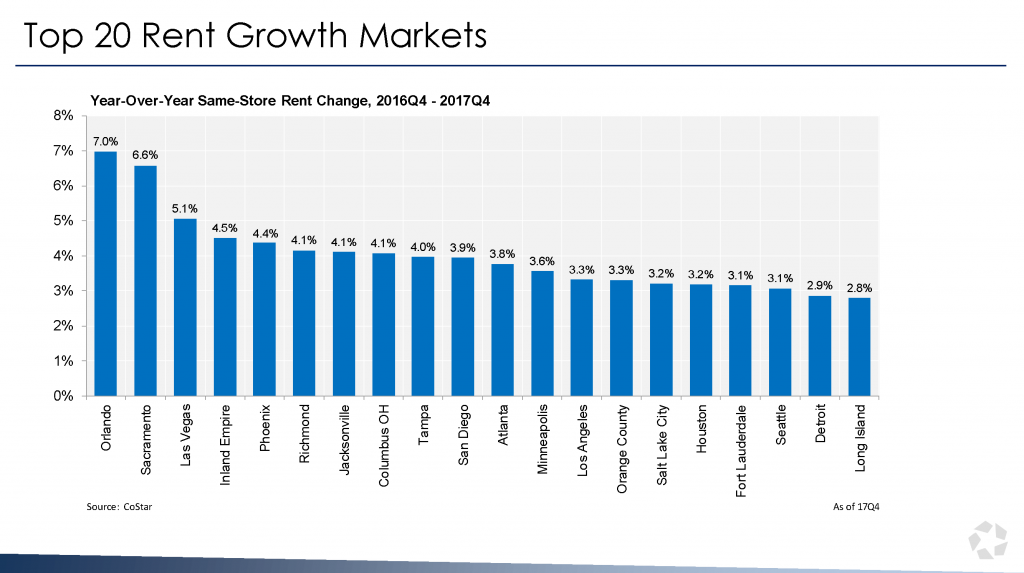 All three forecasts found that due to the highest housing scarcity and bolstered local pricing, California continues to dominate in rent growth. Across the top 20 metros for rent growth across the united states, each study found that between three to four major California metros were consistently identified as top performers.  The CoStar Group study specifically called out Sacramento, the Inland Empire, and San Diego as benchmark metros, leading all other California cities in lacking supply. According to this study, Sacramento currently ranks #2 in year-over-year rent change at 6.6% with the Inland Empire ranked #4 (4.5%) and San Diego ranking #10 (3.9%).

Is such rent growth projected to continue into 2018? All three forecasts do call for continued growth, but distinctively slower than the previous 24 months.  In his report for Yardi Matrix, lead researcher Paul Fiorilla reports that tepid national rent growth will average at around 2%.  CoStar also confirmed that a rent growth rate near 2% is likely, citing an increase in interest rates and an easing of supply as driving factors.  Even if expectations continue to point toward lower rents, all three studies were optimistic. Each had a different way of expressing it, but all three studies cited a strong, healthy economy and below average housing as factors that could result in a slow, and steady downward trend. 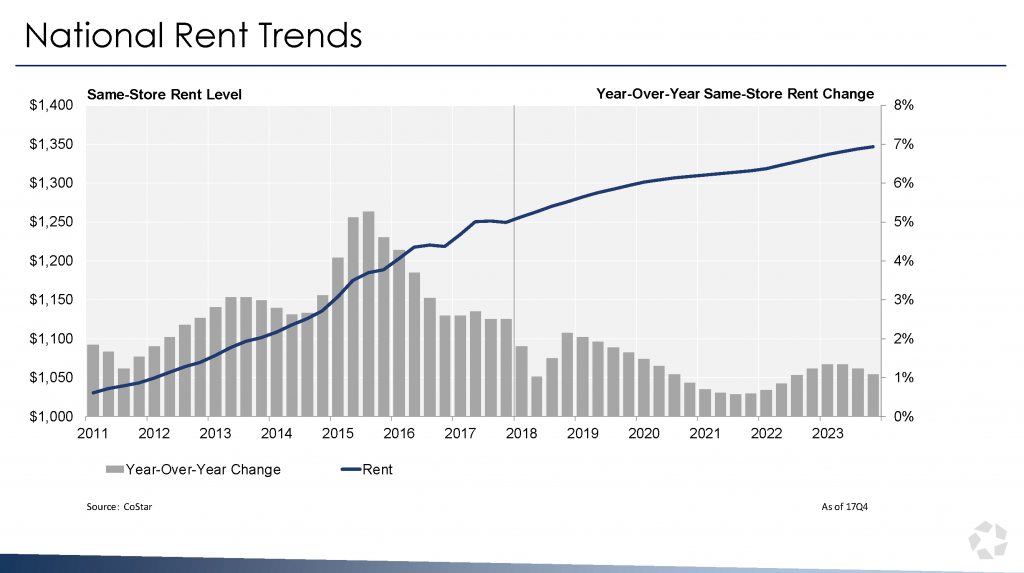 “It’s going to be a good year.  I guarantee it” notes Alan Nevin in the Xpera Group report. Nevin was quick to forecast that California was one of three states (Texas and Florida being the others) where he predicts that 45% of national population growth will occur in 2018. Nevin’s Outlook report further suggests that national unemployment will continue to remain steady between 4.0 and 4.5%, with the United States adding an additional 2,000,000 jobs.

These and other examples show how the studies took an optimistic view of future trends despite smaller increments in property value for rental property, noting that they are a sign of healthy economic conditions. For the multifamily sector, investors can take this opportunity to reflect on the freedom property ownership provides for them. “Multifamily assets are a defensive investment” Michael Cohen noted at the end of his CoStar presentation, noting that although other investment options may appear more intriguing for now, multifamily ownership continues to have unbeatable long-term reliability.