billion year-to-date through July.” The report’s author Ariela Moraru explains. The study further suggested that San Diego trended the fourth highest occupancy rate compared to all major metros and had year-over-year rental averages that were 4% above the national average.

A contributing factor to strong rental numbers across the region were attributed to many new and completed local projects adding to quality of life and property value. “Plans for several large-scale projects are being fast-tracked in order to satisfy a growing demand. Moraru explains, “SoccerCity and San Diego State University have their eyes on the Qualcomm site, while the $1.2 billion Seaport Village redevelopment is aiming at a 2020 groundbreaking.”

San Diego’s economic strength was also cited as a factor causing increased rents. The study found that the region added 20,400 new jobs, up 1.7% year-over-year. As of July 2017, this boost to available jobs has resulted in a 2% employment growth with a regional unemployment rate of 4.7%.  Public sector jobs lead the drive for employment, with most connected to government jobs affiliated with the military presence in the region. Health related jobs have also recently seen a boost. Outside of the study, a recent survey by the California Life Sciences Association recently ranked the county 3rd in the state for the life sciences jobs available.

The study also suggested that new unit development could ease a lack of multifamily inventory in the San Diego County. “Multifamily construction has been ramping up throughout the second half of the economic cycle” the study notes, “Roughly 10,000 units were underway in San Diego as of August, with more than 25,500 units in various stages of development.” However, some recent reports question the possibility of new inventory coming so soon. Roger Showley’s recent article for the San Diego Union Tribune suggests that post-recession construction “may see a slowdown in lending commitments for apartments, offices, industrial and retail projects”. A lack of supply and man-power due to allocation to the East coast for hurricane recovery was cited as a possible reason a slowdown might occur. 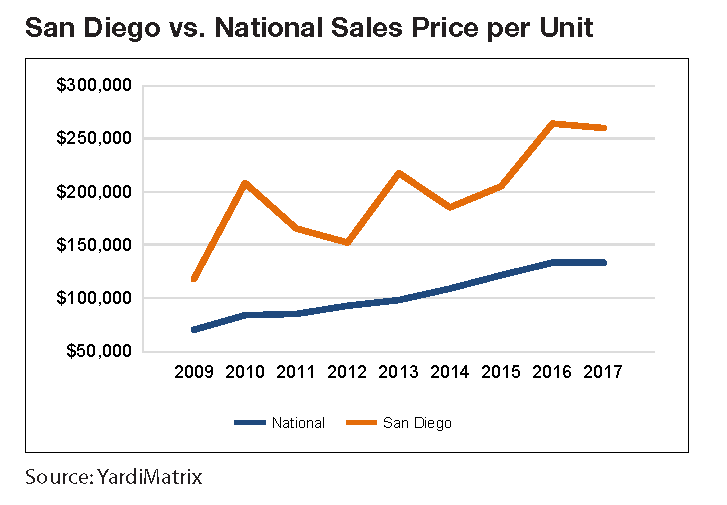 Each of these factors has contributed in a strong multifamily market for San Diego investors. “Nearly $1.7 billion in multifamily properties traded in the 12 months ending in July (2017)… the average per-unit price was $260,653” the report claims, “nearly double the national average.”  This activity in the market, coupled with optimum conditions to continued rent growth and a strong economy further showcases the benefit of investing in San Diego multifamily.