Dave Savage of ACI takes a look back at his sale of Parkwood Apartments in National City, a 96 unit transaction he closed in the early 1990’s.

2017 marks ACI’s 35th Anniversary as a driving force of the San Diego multifamily real estate market. This momentous milestone gives the brokers and agents plenty of reasons to rejoice. One way we will be celebrating throughout this year is through a special series exclusively on ACIApartments.com titled “First or Favorite”. We asked the brokers and agents at ACI to think back and recount their first or favorite transaction over the last 35 years. Each month we will present some of these transactions in celebration of our 35 years in business.

Parkwood Apartments, an REO in the Rough 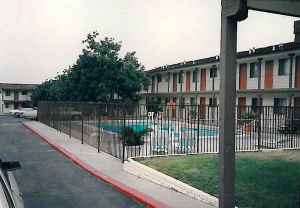 The gated pool courtyard of The Parkwood Apartments

For ACI Senior Vice President and Broker Dave Savage, there isn’t a better example of San Diego multifamily opportunity at its finest like his listing in the late-1980s of 2005-2025 “F” Avenue, more commonly known as “The Parkwood” Apartments. Located in National City just east of Highland Ave, at time of sale this property offered an array of amenities for all of its “cook units”. Built throughout San Diego in the 50’s and 60’s by Roy Cook, “cook units” or “cook studios” featured one bedroom/ one bath or studio units of only about 400 to 450 square feet in size. They are known by shiplap siding and the now iconic birdcage on the roofs. Now celebrating over 27 years as a member of the ACI family, it didn’t take Dave very long to choose Parkwood as the property he wanted to feature for this series. He recalls being initially intrigued by the property’s condition status prior to becoming its listing agent. “I was amazed primarily by the fact that the property was an REO” Savage recalled. An REO apartment deal was a very rare thing in those days. 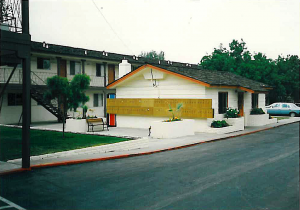 A wall of mail boxes at The Parkwood Apartments

An REO or “Real Estate Owned” is a term used to describe a property that is owned by a lender after an unsuccessful sale at a foreclosure auction. In this case a local S and L had actually partnered with a local entrepreneur to acquire the property. The deal had gone bad and the bank had foreclosed on the partnership and acquired the title.

Given that San Diego is a city of apartment deals averaging 15 units in size, Dave was also excited by the scale of the transaction. “For a first listing, 96 units was a big deal.  A great opportunity and a great experience”.

A Great Investment Then and Now 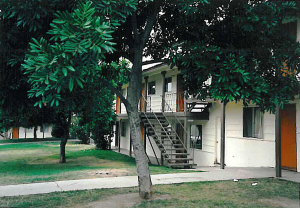 Marketing the property in those days proved to be an experience all its own. A fun example is the marketing package Dave provided for this article. Typed out fully on a typewriter, the document is strategically structured so that photos of the property could be glued to the page. “Our marketing was the opposite of high tech in those days” Savage amusingly recalls, “You might even go so far as to call it primitive. Even so, we were growing in our marketing efforts. I believe this was the first listing to offer color photos glued to each page!”

At time of sale the property was unique for being a major apartment asking for only 10% down, with marketing material even predicting that over time the property would dramatically increase in value. “The ‘Buy-And-Hold’ model works well in San Diego” Dave noted when speculating about the property’s current value, “a 2.9 asset like it could easily be worth $15,000,000 or more today and even more tomorrow.” In fact, the recent sale of similar sized suggest this is likely. According to CoStar, a 96 unit property of similar design and construction in neighboring Chula Vista sold for in August of 2016 $19,500,000.

For National City residents back in the 1990, employment was found in places very similar to those around today. In particular, many residents find employment through the San Diego Naval Station; connected to the largest principal home ports in the United States and home port of the Pacific Fleet. At the time this transaction took place, the area represented the beating pulse of San Diego. 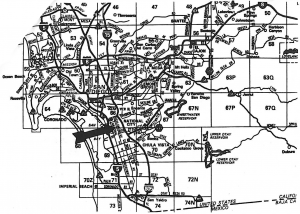 This map was adapted into the property’s original marketing package.

Even back then its strategic value was clear.  Parkwood’s marketing package makes reference to this fact by claiming National City had high demand for rental units “due to the proximity to military bases, the area’s reasonable rental rates, and the lack of available land to develop competing apartments.” In addition, at time of sale the average rental rate for the area was $400 at near zero vacancy.

With numbers like these, you realize that times have defiantly changed. But Dave Savage continues to give an optimistic view of the market. To him, this property represents the value that retaining a property in the San Diego market can have, so long as you are willing to jump in. “Get in the game and the San Diego market will propel you forward.”