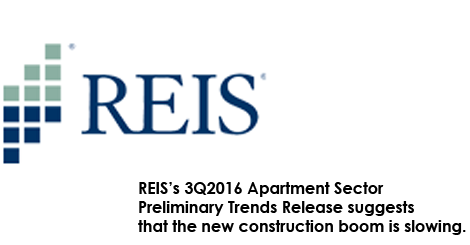 This article was originally posted by Shakira Wiltshire for REIS and Multifamily Executive and can be found HERE.

Economist Barbara Denham suggests that the market shift is a reaction to economic conditions in the beginning of the year.

REIS’s newly released data on apartment vacancy, absorption, consumption, supply and demand, and rent trends show some softening in the rent market in the third quarter of 2016. High construction levels and weak economic conditions in the beginning of the year have predicated this deceleration, according to REIS economist Barbara Denham. A concurrent drop in new multifamily permits suggests that developers are concentrating more on leasing the existing surplus of units.

Excess of New Units Won’t Necessarily Cause High Vacancy Rates
Construction exceeded absorption for the sixth quarter in a row in Q3, but the margin between new construction and net absorption (37,693) is only 51 units. Denham doesn’t rule out a possible increase in the vacancy rate once the data are finalized, but she doesn’t think the rent-growth rate (0.9% in the third quarter) will slow as a result. Denham predicts that new construction will continue to exceed absorption, but that job growth and housing market slowdowns will prevent high vacancy rates.

In Q3 2016, the vacancy rate was 4.4%, unchanged from the previous quarter and up 10 basis points year over year. Much of this vacancy is concentrated in newer properties, according to Denham, which are not seeing the same demand for tenants that was present before 2016. The vacancy rate for these new properties has increased sharply over the course of 18 months, as developers have overbuilt in some markets and demand has fallen.

Sacramento, Calif., holds the lowest vacancy rate nationwide, at 2.1%, one of 10 markets below 3%. Thirteen markets saw a vacancy-rate increase of more than 0.1%, including San Jose, Calif., and Portland, Ore., due largely to high construction rates.

In REIS’s current estimates, Q3 2016’s new-construction level marks a decline from Q2 2016, at 37,744 new units delivered. Quarterly demand is at its lowest since 2013, at 37,693 units absorbed. (Denham notes that this quarter marks a time of rapid change, which makes it difficult for REIS to track leasing and certificates of occupancy.)

Rent Rates Still Growing, Albeit More Slowly
Over the course of the third quarter, asking- and effective-rent rates both grew by 0.9%. These rates mark a slight slowdown from the 1.1% growth in Q2 2016 and a much larger drop from the 1.7% growth rate in Q3 2015. Asking and effective rents have grown 3.8% since Q3 2015, a decline from the previous 4.6% year-over-year (YOY) growth in asking rents and the 4.5% YOY growth in effective rents between Q3 2014 and Q3 2015. This deceleration is in line with REIS’s expectations—Denham notes that the gap between asking and effective rents hasn’t widened in the past few quarters, suggesting that landlords are confident in the growth of the market despite the declines.

New York City’s $3,441 per month effective rent was the highest in the nation this past quarter, followed by San Francisco, at $2,481. Both of these rates have decreased, however, in the wake of lower leasing rates. Charleston, S.C., and Seattle are tied for the strongest rate of effective rent growth, at 2.0%.

Barring any influence that the upcoming election may have on leasing decisions, Denham predicts that net absorption should stabilize in the next few quarters as job growth remains constant. Median household income growth will likely improve economic confidence, but Denham still sees new construction outpacing absorption. Vacancy should continue to increase, and rent growth should stabilize at below 4% annually.

The above article was originally posted by Shakira Wiltshire for REIS and Multifamily Executive and can be found HERE.

This or other topics can be found at REIS, Inc.