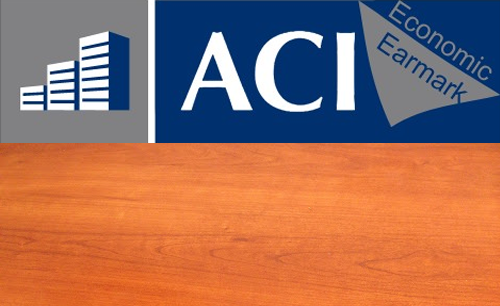 Whether an investor is preparing a property for sale or revitalizing an aging asset, implementing the right kinds of amenities or interior design could easily result in optimized rents depending upon which tenants they are trying to attract, so says data from the upcoming Multifamily Executive Concept Community survey. Information from various sections of the survey, set for release in September, offers a unique glimpse of how interest in paying more for services and aesthetic elements change across the generations. 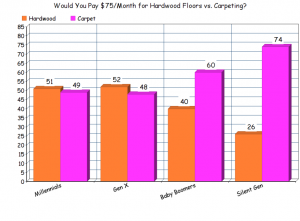 For instance, in an article released Friday, Jerry Ascierto notes that renters of the younger generations were much more inclined to pay higher rent premiums for hardwood flooring instead of carpet. Survey data found that 51% of Millennials and 52% of Generation X would be willing to pay upwards of $75 for hardwood flooring. This finding exceeded that of Baby Boomers willing to pay (40%) and was nearly double that of the Silent Generation. 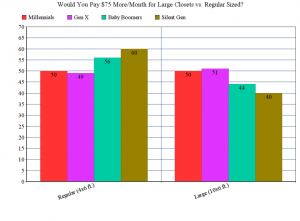 Similarly, in an article released early in July, Ascierto found that the younger generations were also willing to pay more for another interior improvement, closet space. The general survey found that 49% of all surveyed would consider spending an additional $75 for a larger closet space of 10 X 6 ft. compared to the average size of 4 X 6 ft. Unsurprisingly, when those surveyed were divided by generation Millennials (50%) and Generation X (51%) still lead enthusiasm toward the idea of larger closet space compared to their older cohorts.

Ascierto attributes this dramatic separation of generational interest to two factors. First, many of the older generation may be forced to maintain a fixed income, and are thus willing to sacrifice extra perks for the sake of keeping to a budget. According to the 2012 data collected by the AARP, Americans 65 years and older had an average income of over $31,742 yearly. With only the additional supplements of Social Security accounting for some financial cushion, many of the Silent Generation are forced to forgo more eccentric or large scale amenities in order to break even. Younger generations fare far better on fixed income, with a national average of $76,061 according to glassdoor.com.

Second, Ascierto maintains that younger generations are more inclined to desire open, authentic experiences. Whereas hardwood flooring for an older generation may elicit fear of slipping, for younger generations it can give the impression of a rustic, authentic feeling. Even if the material is a composite product instead of traditional hardwood, the notion of walking on a more natural material instead of processed fibers plays strongly on the public perception of the eco-conscious younger generation. It seems even outside of unusual amenities, generational strategies can dictate the potential return one may get from a property.

Jerry Ascierto’s articles on the Multifamily Executive Concept Community Survey covered in this article can be found HERE and HERE.