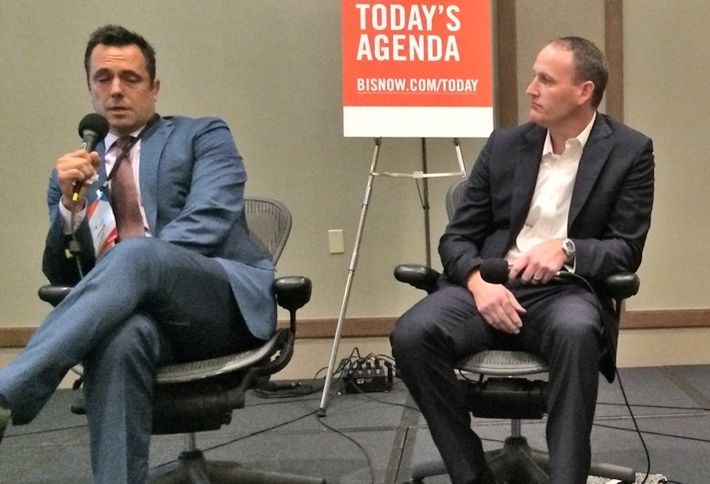 This article was originally posted by Patricia Kirk for bisnow.com

Downtown San Diego has a great opportunity to build housing, but the city needs to attract more jobs downtown to support that growth.

AVRP Studios owner Doug Austin, an architect who moderated the developer panel at Bisnow’s 3rd Annual Future of Downtown San Diego event last week, started the discussion asking CityView managing director Tony Cardoza (snapped left with Will Winkenhofer) what opportunities he sees for investors in Downtown. Noting the favorable projections for economic and employment growth, Tony said, “There’s a real imbalance of supply and demand, despite the supply coming online. The latest figures show six jobs created for every one unit of housing, so there’s a great opportunity for continued (residential) growth here in San Diego. “But one of the mismatches we see from the previous speakers (Mary Wolshak and Kris Michell’s presentation) in what they’re trying to do Downtown—the major doughnut hole—is getting a major employer into Downtown San Diego.” In other markets, such as LA, S.F. and elsewhere in the Bay Area, what generates a lot of residential development is getting a major employer there and giving tax breaks to generate new growth, Cardoza added, noting it takes partnerships between political and business groups. “That’s the impediment we see for San Diego really taking off over the next 10 years,” he stressed. 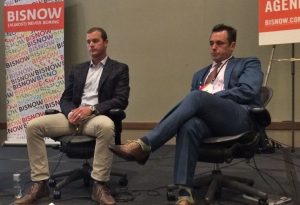 Richman Group of California Development Co president Luke Daniels (pictured left with Tony) noted the ratio of jobs in Downtown to people living there is 2:1, but in LA its 10:1. “From a capital markets standpoint, Downtown San Diego is a ‘watch market’ relative to the 8,000 apartments and condominiums in some phase of development and job growth,” he said. “The concern is that we have to attract a major employer Downtown.” Luke pointed out the capital markets tell us we need to get to 5:1, so if we have 50,000 people living Downtown, we need 250,000 jobs to be considered healthy, balanced and vibrant from a capital markets perspective. 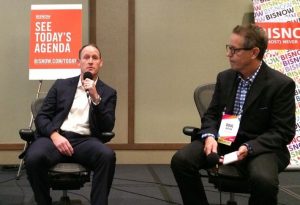 Responding to a question about the types of amenities Wood Partners is putting in Downtown projects to attract and retain tenants, Wood Partners VP Will Winkenhofer (pictured left with Doug Austin) said, “One thing we’re doing…is taking it to a new level, using what I believe is our greatest asset in San Diego, sunshine. We’re using that to our advantage, turning indoor space into outdoor space,” he explained. In addition to a rooftop pool, a variety of social spaces—cooking and dining space, games, fire pits, cabanas and gathering places—were added to create a “tripped out” rooftop experience. Will noted a study of Little Italy residents revealed that 30% to 40% of residents who live there work from home. So his company decided to create a flexible lobby space in the high-rise project, The Rey, which is geared to Millennials. The space acts similarly to a Starbucks by day—a co-working environment—and can be opened up in the evening for community events. He also said high-tech e-commerce lockers are being installed that notify recipients of deliveries via their smartphones, providing the locker number and a code to unlock it.

It’s hard to make high-rises pencil, Doug said, asking Swinerton project executive Brian McCarthy (snapped left with Luke Daniels) about innovative strategies for keeping construction costs down, given luxury features like rooftop pools. “Where we’ve had our best success in controlling costs for customers is when we have the opportunity to get involved early,” Brian replied, noting this requires a level of trust beyond “hey, this is what I want it to look like, price it for me.” “We really need to create some repetition in what we create, an ability to plan and prefabricate, rather than having 77 different unit types, if at all possible, and keeping the building somewhat uniform,” Brian said. “This obviously allows us to build faster and for less money.” A rooftop pool versus a pool elsewhere doesn’t move the needle much, he said, but the ability to repeat and create parking without going below grade as much as possible is the best way to hold down cost. Another opportunity to save money is the influence trusted subcontractor partners can have on the design if brought in early. Brian suggests they often have good ideas on how to build something while saving money. 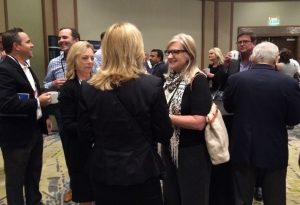 Commenting on Brian’s discussion, Will said later this year his company will break ground on a 23-story high-rise in East Village with amazing views of the water due to its location in the last block of the Ballpark District. The site, however, has constraints due to its proximity to the new library and a fault line that runs through it. Therefore, the only way to make it pencil was to put three levels of parking below grade and three above, he noted. As a result of a strategic mix, including the parking strategy and rents based on the highly desirable view corridor, the basis is low enough to hit a return on costs about 160 basis points above today’s exit cap rate, Will said.

This article was re-posted with permission from Bisnow.com, you can find the original article HERE.