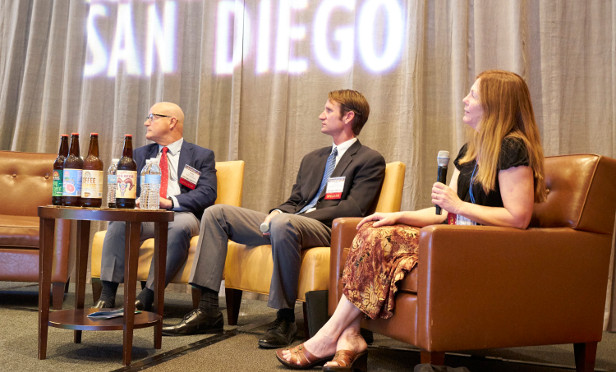 This article was originally posted by CARRIE ROSSENFELD

SAN DIEGO—From the need for housing residents can afford to a growth period for waterfront development and the strength of the craft brewing industry, there are lots of real estate opportunities in San Diego, said panelists at RealShare San Diego Tuesday. Speakers on the “Economic Drivers and Influencers: Market Impact and Outlook”panel said the market is growing and continues to grow partly because of its business diversity.

Moderator Gary London, president of the London Group Realty Advisors, said not too much would be happening with interest rates this year because it’s an election year. “There’s been some complacency due to low cap rates, but this can’t last forever, and the cycle will turn. There’s a lot of foreign stuff going on that impacts our market in a positive way.”

London said the hotel sector may be the first to see lower valuations since it has been overpriced for some time. With housing, he sees an imbalance of supply and demand. “There’s virtually no development in the suburbs to accommodate new residents.” Bottlenecks at the border, despite measures to assuage them, are also hurting trade.

Andy La Dow, regional managing director—San Diego for Colliers International, said San Diego is somewhat insulated from economic downturn because of its diversity, and industrialland is worth more all the time as other sectors repurpose it. The office market is at an overall 12% vacancy rate, and there’s been a shift in the last three to five years in how companies view space, with CEOs keeping an eye on talent retention. The number of industrial buildings converting to office is compressing the industrial industry as well.

London asked La Dow if sustainability is still important, and La Dow responded that it does continue to permeate. It does cost money, but programs like LEED and CALGreen and issues like behavior, wellness and recycled/repurposed materials are still promoting green features in the built environment.

London pointed out that our ability to work on the fly due to mobile technology has compressed the square footage per employee in office buildings, and La Dow agreed that there is a greater demand for efficiency in these buildings. “The ability to be outside and work, to just have a locker as a touchdown space” is a new concept that may be too far of a leap for older workers, he said.

Tony Gordon, principal, portfolio management, for the Port of San Diego, said the port is in a unique position right now, with many of its long-term ground leases expiring. “There’s a feeding frenzy when properties turn over.” Currently, the port is dealing with expiring leases in the Central Embarcadero region, including Anthony’s Fish Grotto and Seaport Village, which opens up the possibility for significant redevelopment in that area of Downtown. “The timing is right to re-envision that whole 78-acre space for redevelopment opportunities,” Gordon said. The Port has received 11 RFP proposals, which it is reviewing, and with the Hotel InterContinental’s return and the imminent Convention Center expansion, exciting things are happening on the waterfront.

Gordon said the Port is trying to partner with private developers to set the table for development Downtown, and it is working to improve cargo throughput and growth for shipbuilders there as well. In addition, one of the goals is to increase waterfront jobs

Claudia Faulk, partner and CFO of Aztec Brewing Co., said the beer industry is growing like crazy, with 123 breweries in the San Diego market. This opens the opportunity for supporting industries, including building the breweries and supply-storage buildings. “There are endless businesses connected with it.”

London asked why there are so many breweries clustered in North County’s Vista submarket, and Faulk said the city is friendly to breweries. “It’s easier for new companies to come in. There are a lot of us, but we’re very supportive of each other; it’s a close-knit community.”

London asked why beer has become such a big deal, almost overnight, in San Diego, and he joked that it was the water. Faulk said, “The water in San Diego is really good for IPA. Many breweries filter their water, but the smaller ones use it straight from the tap.” She added that companies like being in San Diego because it’s so beautiful here.

La Dow pointed out that the people who started breweries here are “really passionate about beer.” He said breweries lease about 1.2 million square feet of industrial space in San Diego, giving the industry a significant presence in the market.

And rather than increase crime, breweries actually help reduce it, said Faulk. “Breweries and tasting rooms actually lower the crime rate in business parks because the prime time for business-park break-ins is between 7 and 8 p.m., usually when the park is empty. When asked what will happen with the beer industry, Faulk said some of the small companies are dropping off, but it will continue to be strong.

London said the industrial sector is compressing due to lack of available land, which is creating the need to go vertical. He asked La Dow for his thoughts on this, and La Dow said, “As land values increase it makes it difficult to build tilt-up industrial. San Diego is a small industrial market that will continue to be extremely tight.”

This article was original posted by GlobeSt.com and can be found HERE.