ACI Economic Earmark – Focused on Your Success in El Cajon 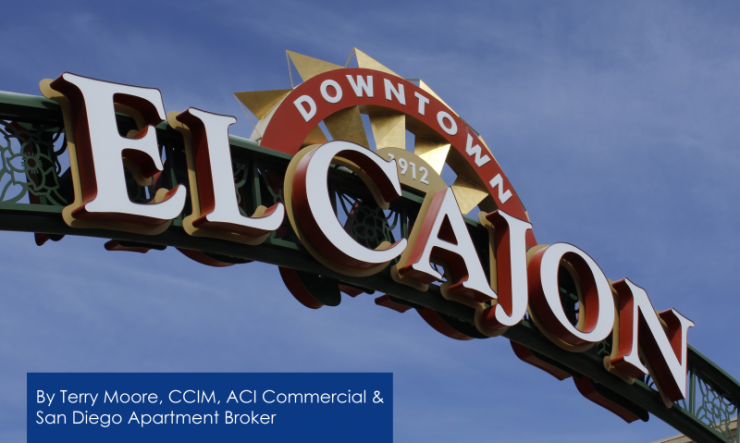 For many investors, El Cajon is a trade up market. Thousands of households began building wealth in smaller properties in less affluent areas. As their wealth grew, though, many families shifted their equity to El Cajon to gain advantages that community offers:

The result is a group of mature property owners. Many of them have stayed the course during more than one recession. 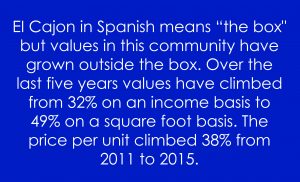 Good people own and rent in every zip code in our county. After having served rental owners for more than a generation, my perception is that the El Cajon owners are more seasoned and wiser than the investors who not been through more than one recession.

During last decade about 1000 El Cajon units were converted from apartments to condominiums. The condo converters pumped about $400 million into improving the housing stock.

The thousand condo buyers did more improvements and put down deeper roots. The Great Recession had terrible consequences worldwide, and also 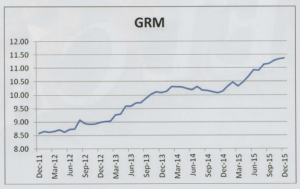 hurt El Cajon. unfortunately many first time home buyers lost their condos. However the housing stock is in better condition now than it was before, and El Cajon’s homeownership has increased. Landlords especially appreciate that fewer apartments translate into higher occupancy for the landlords with El Cajon apartments.

I’m keen on El Cajon! Our most successful property renovation and our best condo conversion were in this fine city. Rental owners respect its salt of the earth stability.

Looking at the numbers – on a deeper level. 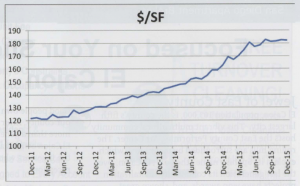 In this third article of the series you again see: cost per apartment, cost per square foot of improvement, and gross rent multiple, how many years of rental income the buyer paid for 180 property. More than 70 sales were analyzed from 2011- 2015. Each data point on the graph represents the average of the previous 12 months, a moving average. Appraisers use all three measures to determine value. These three measures show El Cajon have grown from 32% (GRM went from 8.5 to 11.3); cost per unit increased from $107k to $148k, 38%; and per rentable square foot climbed from $131 to $181, 49%. That’s very impressive but frankly the real impact more dramatic.

So much for history … what do we do now?

Regardless of where your equity spent the last decade, now put your equity where it’s most likely to give you the best result in the next generation. Let’s take a longer view … a much longer view.

When she accepted the life time achievement award, Linda Morris challenged us to live a life worth imitating. SDCAA members have inspired me to record some of their successes and lessons. When we were younger we may not have thought much about legacy. Friends, sometime in the next hundred years you and I will be gone.

The inheritance we leave will include the keys, the cash, the property … the stuff.

Legacy is more important than inheritance. Our legacy will be what people can do because we were here. Our character, our habits, our choices in pivotal moments, our modeling, all contribute to our legacy. As we think about the lives we are living, and the legacy that we want to leave, let’s focus our efforts in ways that will benefit those we care about.

Is your real estate equity promoting the legacy that you want to build? will we known as people who focused on our comfort and convenience or people inspire and benefited others?

As always, please save the article or articles which pertain to the areas are you own.

You remember that as an SDCAA member, you’re entitled to receive a free estimate of value of your apartment building. That valuation is confidential and there’s no obligation. It’s part of our team’s focus on your success. 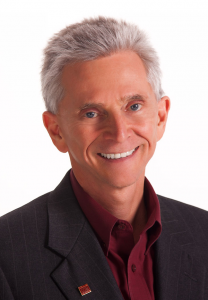 About the author: Terry and his wife, Sandy, been rental owners for almost 40 years. He is an owner of ACI, Apartment Consultants Inc, San Diego’s most active apartment brokerage. Contact him at 619 – 889 – 1031, tmoore1031@gmail.com or SanDiegoApartmentBroker.com

This article was originally featured in RentalOwner Magazine,  information about the magazine and its subscription service can be found HERE.