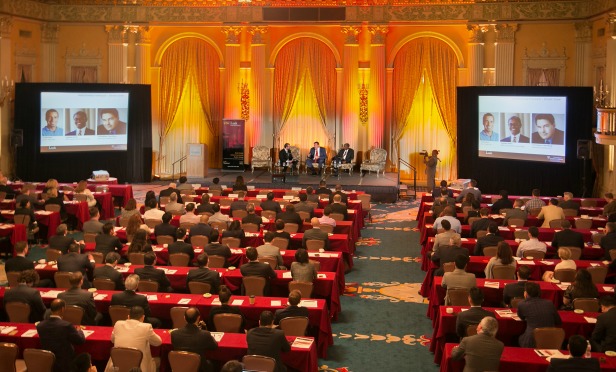 While many national analysts say that the bull multifamily market is coming to an end this year, experts at the Casden Multifamily Forecast say that Southern California can expect two more years of growth.

Los Angeles – Southern California should expect another two years of growth in the multifamily sector, according to experts at the USC Casden Multifamily conference. While there have been reports forecasting a slowdown in the bullish multifamily market this year, Raphael Bostic, interim director of the USC Lusk Center for Real Estate says not to expect the local market to let up.

“Despite rising home sales and increasing multifamily construction, growth in population and employment is keeping demand for rentals very high when compared to new inventory entering the market,” Bostic tells GlobeSt.com. “Developers have been able to respond to the quickly changing economic outlook, bringing multifamily construction to pre-recession levels with the help of an 18% increase in permits for construction. Millennial demand for multifamily housing in particular should remain strong in the coming years, adding to the market’s active growth. Savvy developers must react promptly and look toward submarkets to build and fulfill that demand.”

Over the next two years, Southern California, or specifically Los Angeles, Orange County, the Inland Empire and San Diego County, can expect to see significant rent increases and decreases in vacancy rates as apartment supply wanes. In fact, apartment vacancy rates are predicted to decline through 2018, even with 38,000 total units under construction in four regional markets last year, 17,869 of which were in Los Angeles alone. As a result, rents are expected to continue to increase by $109 in Los Angeles County, $149 in Orange County, $84 in the Inland Empire and a whopping $155 in San Diego County by 2018. “Though multifamily construction permits are back to pre-recession levels and have provided some relief, population and employment growth are driving up demand faster than new inventory can hit the market. For renters, new construction has simply kept a bad situation from getting drastically worse,” says Bostic.

In Los Angeles, the average rent is $1,307, a $59 increase from 2014, while Orange County rents were the highest of the four regional markets at $1,587, an $81 increase from 2014. Vacancy rates were also the lowest in those markets, at 4.2% and 4.4%, respectively. Average multifamily asking rents are $1,155 in the Inland Empire, where vacancy rates are the highest in the SoCal market at 7.5%, and $1,422 in San Diego, where vacancy rates are 4.6%, according to the forecast, which was prepared by Bostic and Christopher Thornberg, Beacon Economicsfounding partner; Robert Kleinhenz, executive director of research; and Rafael De Anda, research project manager.