Employers do the most hiring since 1999 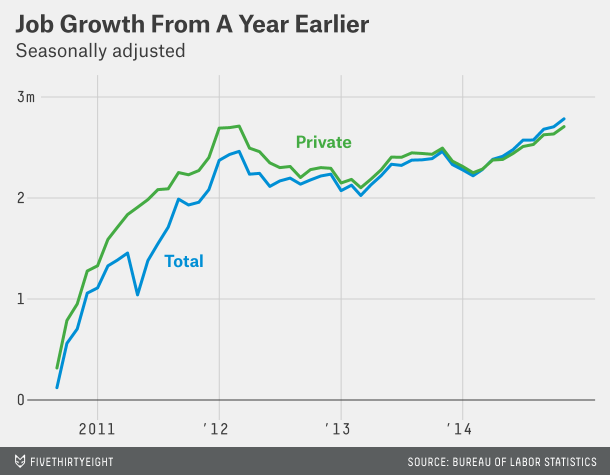 December capped off the nation’s best year of hiring since 1999, with employers adding a healthy 252,000 payroll jobs and the unemployment rate declining to 5.6 percent, the U.S. Bureau of Labor Statistics reported Friday.

Last year’s progress pushed the jobless rate down to a six-year low, and near the range that the Federal Reserve considers consistent with a healthy economy. The year of growth supports expectations that the United States will strengthen further in 2015 even as overseas economies stumble.

“Firms are out there and they’re hiring,” said Esmael Adibi, economist at Chapman University. “It could be for part time, but if somebody is unemployed, there should be opportunities out there.”

In 2014, nearly 3 million Americans found a new job. As they got hired, the unemployment rate dropped by 1.1 percent, continuing a decline in the rate since peaking at 10 percent in October 2009. Tony Cherin, a finance professor at San Diego State University, called the increase in payroll jobs and the decline in the unemployment rate a double dose of good news. He said, however, that it remains to be seen how the Federal Reserve would react to the data in terms of whether it will raise interest rates.

“There doesn’t seem to be at the moment any major increase in inflation, and wages are still stagnant,” Cherin said.

While the overall number of jobs grew, Friday’s report wasn’t totally positive. The unemployment rate fell in part because people dropped out of the labor force – they either retired or left the labor force. Last month, the number of unemployed persons fell 383,000 to 8.7 million. However, fewer than one-third of people out of work found jobs; the rest stopped looking. The percentage of Americans who are either working or looking for work fell back to a 37-year low last touched in September.

The declining number of jobseekers generally happens in a poor economy, not one in expansion mode, Adibi said.

“We want available labor to come to the market, especially when the economy is improving,” he said. “When the economy is sinking, people leave to go back to school, or stay home. Now is a time for them to come back.”

Perhaps one reason jobseekers aren’t coming back is that the jobs aren’t worthwhile to them. The nation’s average wage declined 5 cents per hour to $24.57 in December, following a 6 cent increase in November. Over the year, pay grew 1.7 percent, barely ahead of inflation, now at 1.3 percent. Additionally, the plummeting oil prices and weak pay growth are helping keep inflation lower than the Fed’s 2 percent target rate. Many economists think inflation may fail to reach even 1 percent this year. A result is that the Fed could feel pressure to avoid raising rates anytime soon.

While inflation may continue to decline, wages could begin to face upward pressure as hiring ramps up and the unemployment rate continues to fall. Lynn Reaser, chief economist at Point Loma Nazarene University, said wage growth should pick up in the coming year as the labor market improves and there is more competition for workers.

“In the meantime, inflation remains under wraps and gasoline prices are falling,” she said. “This means that workers are still making headway and there are good reasons to be optimistic for 2015.”

Overall, Adibi said he considered Friday’s report fantastic because the payroll jobs number is the most important because it represents a commitment from companies. He said the growth exceeded general economic expectations by about 30,000 jobs, and also noted that October and November’s payroll job numbers were revised upward by 50,000 positions. He said it all bodes well for San Diego County and other parts of California, which should also see upward revisions when 2014 local data is re-released in March.

Most economists forecast that the U.S. economy will expand more than 3 percent this year. If it does, 2015 would mark the first time in a decade that growth has reached that level for a full calendar year.

The brightening jobs picture has healed some of the deep scars left by the Great Recession. The number of people who have been unemployed for more than six months fell 27 percent last year. And the number working part time who would prefer full-time work dropped 12 percent.

Still, to keep up with population growth since the recession began, the economy would need to create 4.9 million additional jobs, according to the Brookings Institution.

Economists expect more healing this year. Goldman Sachs estimates that additional spending on restaurants, auto dealers and other goods and services resulting from lower energy prices will lead to 300,000 more jobs this year than if oil prices had remained at their levels of six months ago.

Spending at retail stores and restaurants rose in November by the most in eight months, an early sign that Americans are spending some of the savings they are enjoying on gas-pump prices.

The Associated Press contributed to this report.

This article was originally published in San Diego Union Tribune and can be found HERE.